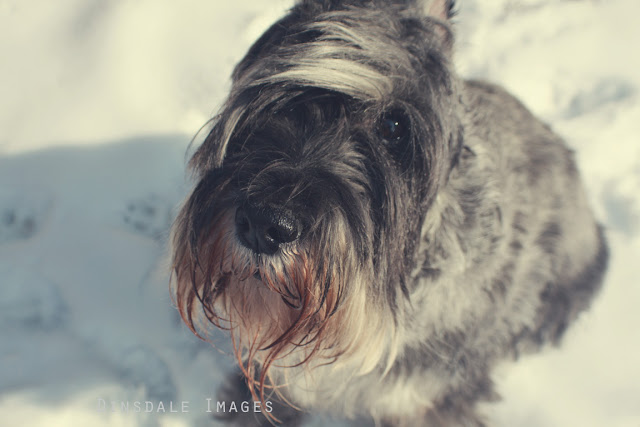 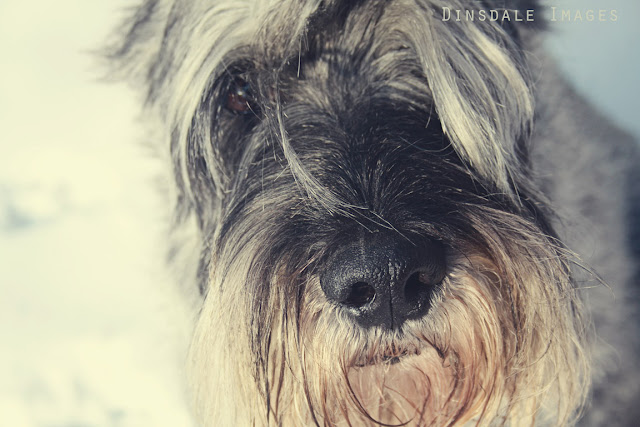 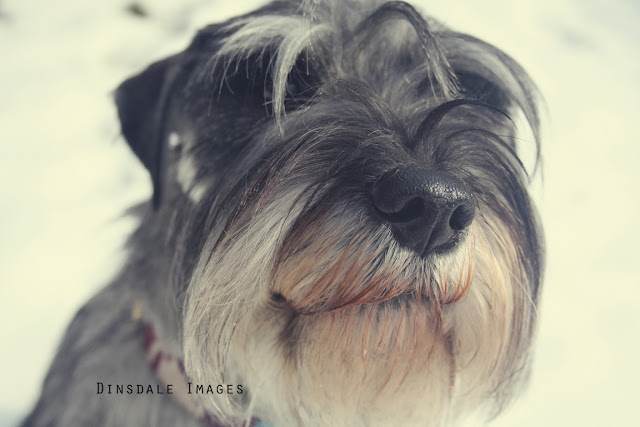 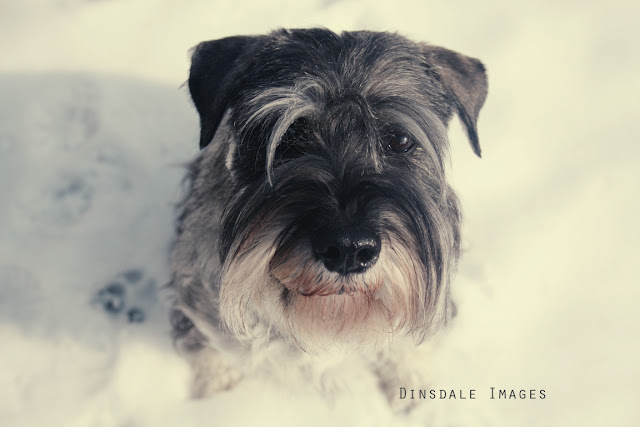 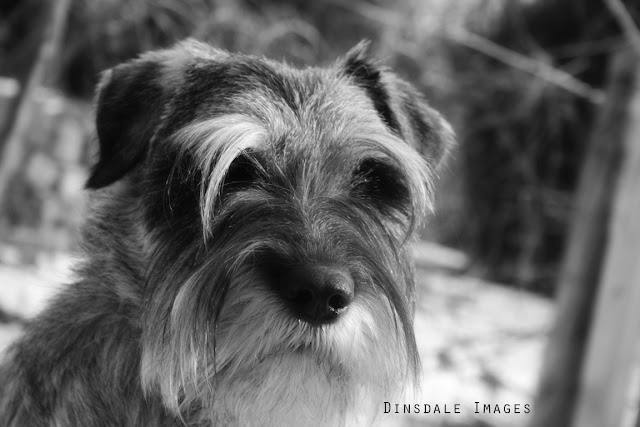 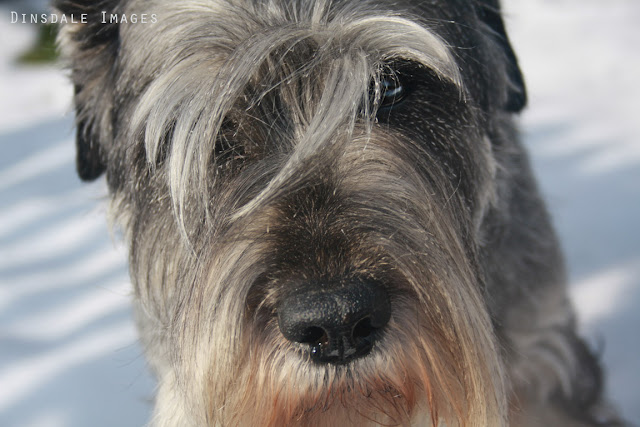 A few more photos can be found on our Dinsdale Facebook page
Posted by dinsdaledogs at 12:01

And now for something completely different.  A sheepdog in rabbit clothing :-)
Posted by dinsdaledogs at 09:22 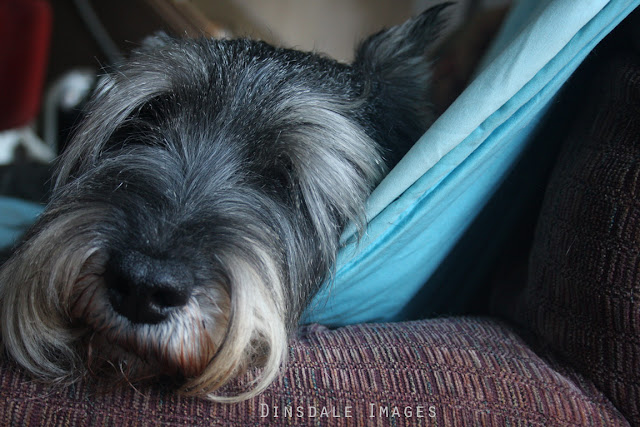 A time to snooze and recharge, or......maybe trim some eyebrows

Nothing at all to do with Standard Schnauzers, but, when I found it on another blog I felt it was such a visual treat that I had to share.  Be sure to watch it full screen.
Posted by dinsdaledogs at 11:14 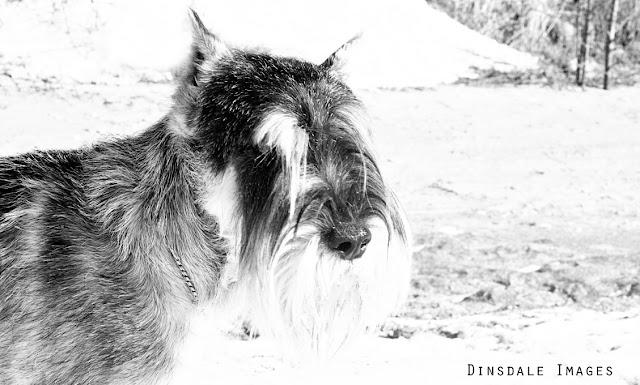 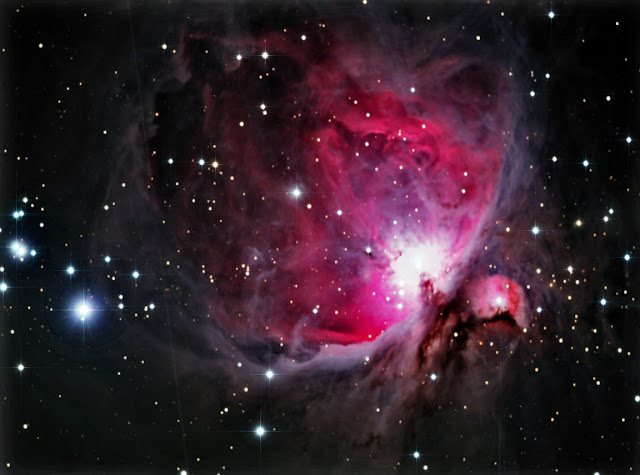 With the extremely cold weather of late comes clear skies at night.  Now, you won't catch me outside taking photos at 2am, but, if the sky is super clear you might find Mick out there.
This is a photo of the Orion Nebula that Mick took on the weekend, isn't it amazing.

This is what the website Space.com tell us about the Orion Nebula:

Orion is located 1,500 light-years away and is the nearest region of massive star-formation to Earth. Located at the center of the Orion Nebula is a group of four young, massive stars; they are collectively referred to as the "Trapezium" because of the shape they make. The Trapezium is surrounded by a halo of 1,000 faint, low-mass stars similar to the Sun.
Posted by dinsdaledogs at 10:00

The breeding of dogs involves many things, hard work, joy, perseverance, frustration, excitement, anticipation, stress and sometimes sadness.  This week we have been working our way through stress, frustration and now sadness.  Our seemingly charmed breeding of Hazel to Cutter, we thought his stud dog days were done, it had been a couple of years since Cutter had successfully sired a litter and several years since we had Cutter pups due to arrive at Dinsdale, ended in sadness.  Hazel encountered complications with the birth that resulted in an emergency C-section and the loss of all the pups.  This is a first for me and one I could of done without experiencing.
The first evening was difficult, Hazel was confused and cried most of the night, figuring it was post surgery pain I gave her some meds and hoped she would settle...she didn't.  Then is dawned on me, even though this was her first litter, she obviously knew she was missing pups.  I gave her a stuffed tug toy and she rushed into her kennel with it, laid down curling her body maternally around her 'puppy' and quietly went to sleep.

Hazel is slowly on the mend, my biggest worry right now is trying to dry up her milk production and avoid mastitis,  although mentally the stuffed toy has settled her, stuffed animals don't nurse and Hazel has huge milk production.  If anyone has any suggestions on how to dry her up, please pass it along.
The other issue, she is very protective of her 'puppy' my other dogs are not allowed to look in Hazel's crate without maternal growls and insults being thrown at them.  Fiddle is not amused.  I'm hoping her hormones will subside more quickly then if she actually had pups to raise.  On the plus side, keeping this puppy clean should be a lot easier then what I am use to with a new litter. 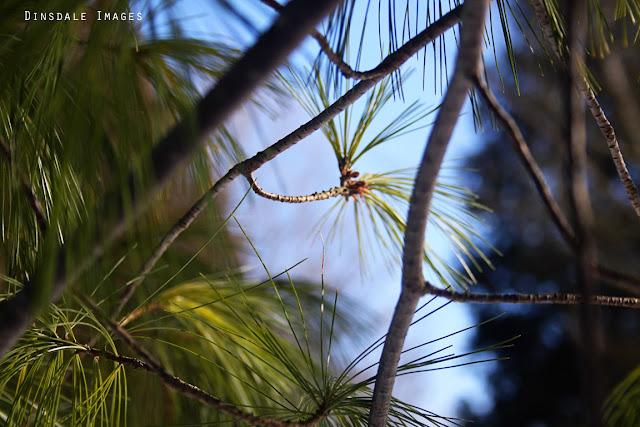 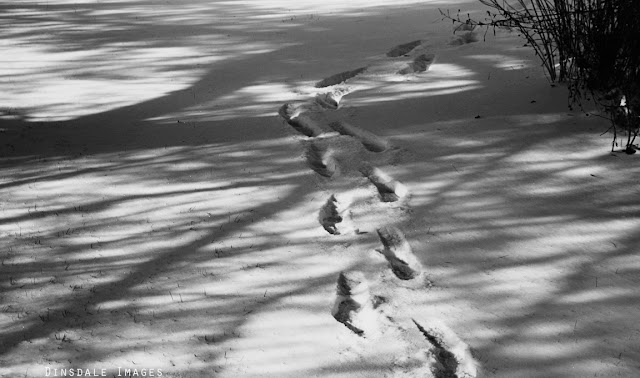 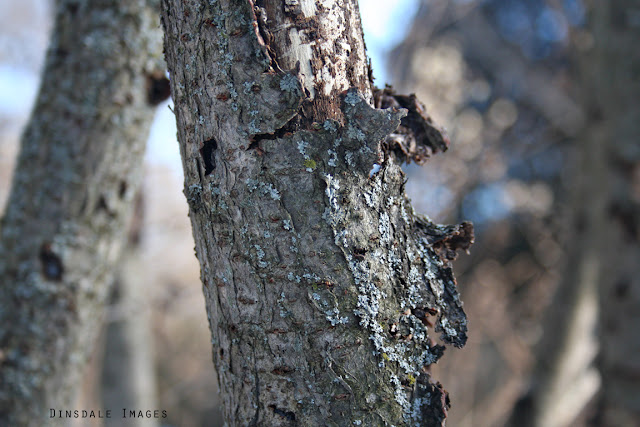 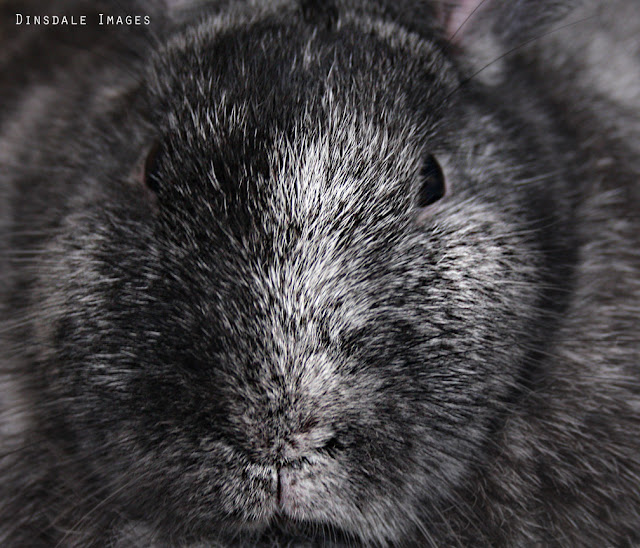 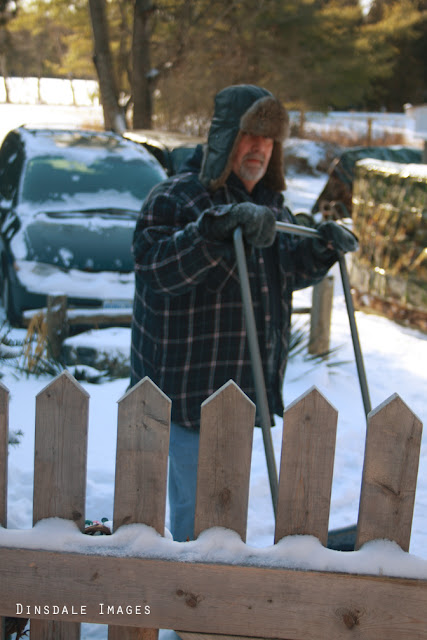 Residing in Canada my January posts have always included snow....this is my first snow photo of winter 2011/2012 and we are into mid January.  To me this is crazy, not complaining, just have never gone until January 13th before having snow on the ground, I have no problem getting use to this. I am going into my 5th year blogging and it is fun to go back to the same day in prior years.  Below are posts from the different years at similar times

Yep snowy in every single one.  Yesterday we had rain all day, when I went outside some very confused daffodils were pushing tips through the ground in my raised bed.  I hope they are able to duck back under the soil. 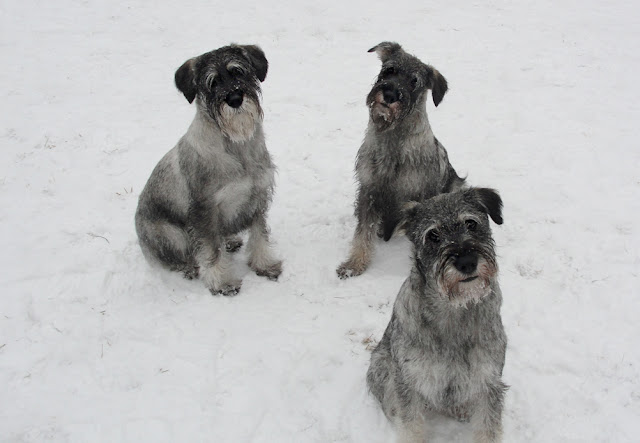 I love when the owners of my dogs hook up for play-dates.  This is a little Manitoba Brat Pack that meets up to let their Schnauzers have a romp.  All of them are Beamish kids (yes my boy that is currently tormenting me-see post below)
Sitting in front is Ailis a Fiddle & Beamish daughter, behind her is her little sister Mitzi and to the left Quito, both Mitzi & Quito are Trinny & Beamish daughters.

Oh the pain and the torment 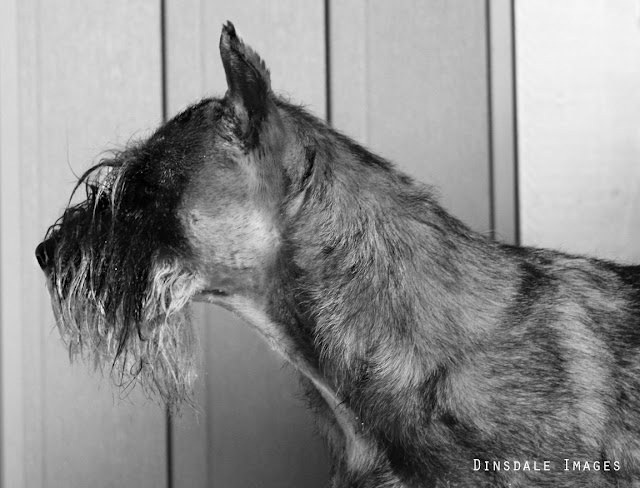 This is my handsome boy Beamish, beard frozen after plunging it in a bucket of water.  I 'normally' love this boy, but currently, when I have females in season, he is not.....hmmmm how to word this delicately?...the object of my affection.  When females are in season Beamish becomes a walking male hormone, a VOCAL, quivering, stammering, pacing, whining, howling, hormonal male.  He takes the prize as my all time TOP butt headed male, and believe me he had to surpass a lot of butt headed males from over the years to take top position.

Love ya Beamish, well... I will love ya in about another 10 days when everyone is out of season.
Posted by dinsdaledogs at 13:47 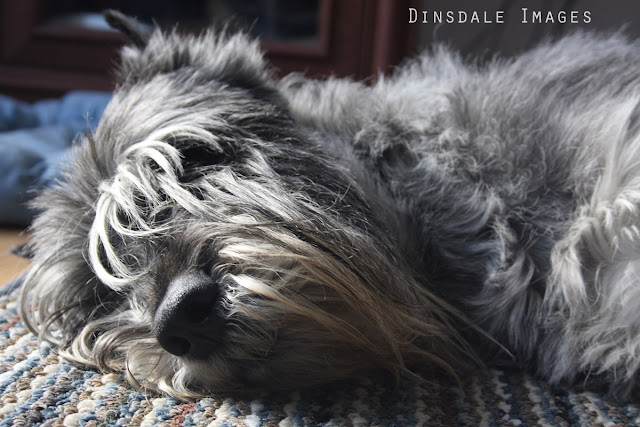 If you ever wondered how a dog breeder knows a female is ready to be bred....just look at their bloodshot eyes, sleep deprivation is a big clue.  Apparently the egg dropped last night around 4am and the boys began howling and whining to let me know that we have fertile girls in the house.  No need for progesterone testing around this place to tell if now is the time for making puppies....Grrrrrrr I need to buy new ear plugs to survive the next few days.
Posted by dinsdaledogs at 09:10 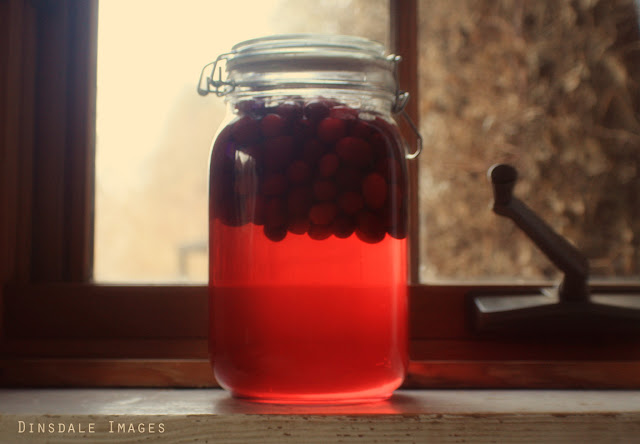 Combine vodka, sugar and fresh cranberries...shake daily until sugar is dissolved, then store in a dark place for 3 months, decant into a bottle and enjoy.  Apparently it gets even better the longer you wait, but, I don't see this sitting around for long. 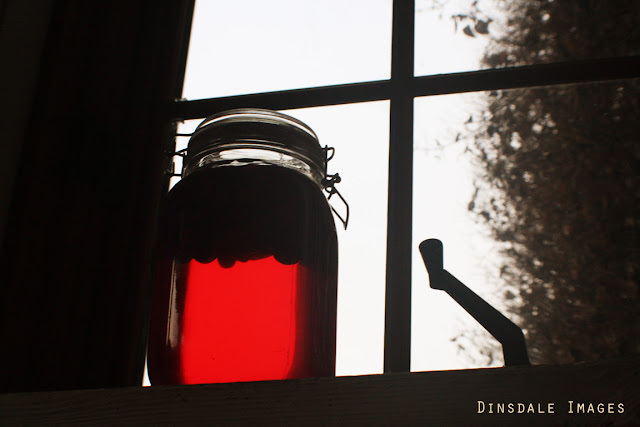 It looked so pretty with the sugar dissolved, had to photograph before wrapping in a paper bag and slipping to the back of the cupboard.
Posted by dinsdaledogs at 12:09 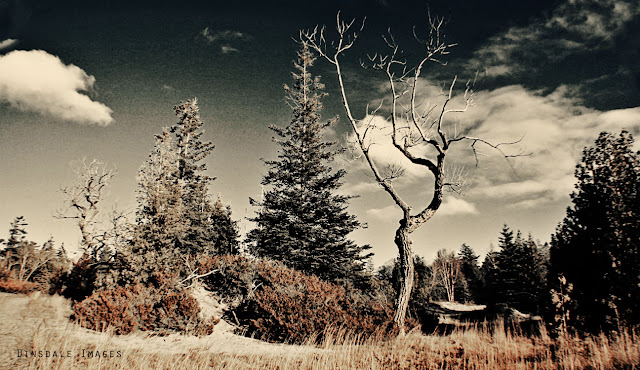 We had one of the mildest Decembers ever, no snow here for Christmas.  Truth be told I really have no problem with that.  Now January...oh my goodness COLD!  2011 leaves us like a lamb and 2012 enters like a lion.
These lovely Long Tailed Ducks were not bothered at all by the crazy temps and winds, business as usual for them.  I looked them up on Wikipedia and they are migratory northern sea ducks that can be found in Northern Canada, Alaska, Northern Europe and Russia, basically anywhere sub-zero, yesterday they must of been in their element.