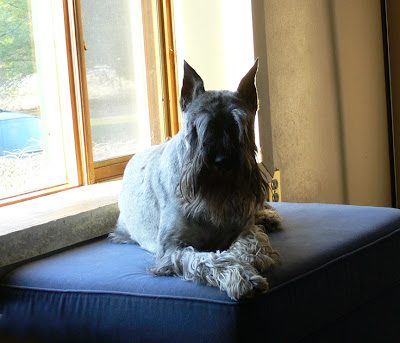 I am sure that is how Humphrey thinks of himself. The girls are all out of season and his brain function has returned. Humphrey is the most pleasant companion....until the girls are in season, then he totally loses it. All the boys are somewhat crazy when the females cycle, however Humphrey is mindless, he whimpers and wails and cannot seem to move from point A to point B without a great deal of guidance. It's been years since I had a boy at the house like this, Ruckus was similar, however, he also retained his intelligence and ability to climb enclosures, a dangerous combination that lead to a couple of unplanned breedings in my early years.

Humphrey has returned to his sweet self now, and here he is chilling out while I drink my morning coffee.
Posted by dinsdaledogs at 08:19